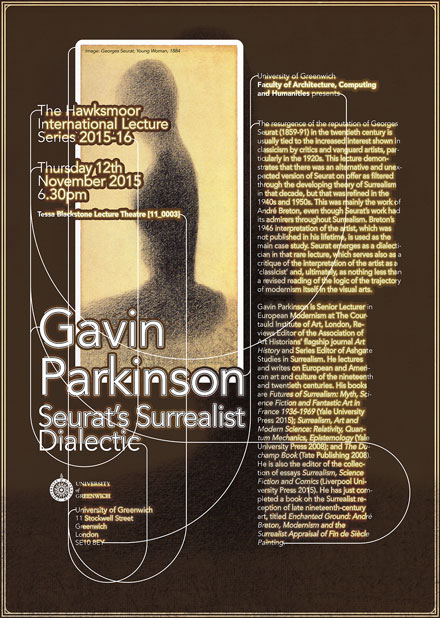 The resurgence of the reputation of Georges Seurat (1859-91) in the twentieth century is usually tied to the increased interest shown in classicism by critics and vanguard artists, particularly in the 1920s. This lecture demonstrates that there was an alternative and unexpected version of Seurat on offer as filtered through the developing theory of Surrealism in that decade, but that was refined in the 1940s and 1950s. This was mainly the work of André Breton, even though Seurat’s work had its admirers throughout Surrealism. Breton’s 1946 interpretation of the artist, which was not published in his lifetime, is used as the main case study. Seurat emerges as a dialectician in that rare lecture, which serves also as a critique of the interpretation of the artist as a ‘classicist’ and, ultimately, as nothing less than a revised reading of the logic of the trajectory of modernism itself in the visual arts.

Gavin Parkinson is Senior Lecturer in European Modernism at The Courtauld Institute of Art, London, Reviews Editor of the Association of Art Historians’ flagship journal Art History and Series Editor of Ashgate Studies in Surrealism. He lectures and writes on European and American art and culture of the nineteenth and twentieth centuries. His books are Futures of Surrealism: Myth, Science Fiction and Fantastic Art in France 1936-1969(Yale University Press 2015); Surrealism, Art and Modern Science: Relativity, Quantum Mechanics, Epistemology (Yale University Press 2008); and The Duchamp Book (Tate Publishing 2008). He is also the editor of the collection of essays Surrealism, Science Fiction and Comics (Liverpool University Press 2015). He has just completed a book on the Surrealist reception of late nineteenth-century art, titled Enchanted Ground: André Breton, Modernism and the Surrealist Appraisal of Fin de Siècle Painting.

The Landscape is a collective blog published at the University of Greenwich, London. The Landscape Architecture and Urbanism programmes are focused on the speculative design of future landscapes and cities informed by site-focused research.