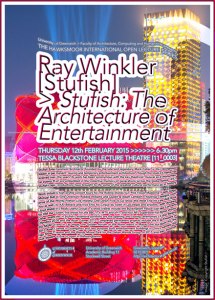 Stufish Entertainment Architects, founded by the late and legendary Mark Fisher, is the recognised leader in permanent, touring and temporary entertainment architecture.

Though the studio’s name has evolved over the years, its work has been synonymous with the key theatrical, musical and monumental events that are embedded in the collective memory of generations across the globe since 1977. Stufish’s epic productions have brought to life some of the greatest cultural performances in history.

Theatrical designs comprise of the Monty Python Live (mostly) One Down Five To Go show, the West End hit We Will Rock You as well as, KÀ, Believe and Viva Elvis for Cirque du Soleil in Las Vegas and projects with Andrew Lloyd Webber’s Really Useful Group.

Other examples in Stufish’s extensive portfolio are the opening and closing ceremonies of the Beijing Olympics 2008 and the Asian Games 2010.

Completed permanent projects include the KÀ Theatre at the MGM Grand in Las Vegas, the Golden Atrium at the Wynn resort in Macau, the stadium for the 2010 Asian Games in Guangzhou and two purpose built entertainment buildings in China namely the Han Show Theatre and the Wanda Movie Park for the Dalian Wanda Group. In 2015 another purpose built theatre is due to open in Xishuangbanna.