Even tough I live and work just a few minutes away, I have never visited the Broadgate Development. I was always just passing by its tall buildings, but never actually daring to cross this stone and metal labyrinth.

Broadgate is a 32-acre office and retail estate in the City of London. It was the largest office development in London until the arrival of Canary Wharf in the early 1990s. The mainly-pedestrianised complex is located on the original site of Broad Street Station (closed in 1986) and beside and above the railway approaches into Liverpool Street Station. The development is huge, it provides 360,000 m2 of office, retail and leisure accommodation spread over 129,000 m2 and more than 30,000 people are employed here.

When I arrived to the site, these people were on their way home, rushing. I remember almost every time when I was stopping to take some pictures, someone bumped into me. It was not a particularly pleasant journey. Also the layout of the development is very confusing. It’s difficult to find one’s way through its narrow streets and passages, surrounded by all those high-rise buildings with just a few public squares around.

I started my journey at the North end of the site (closest to Shoreditch High Street Station), where the 165 m high Broadgate Tower dominates the neighbourhood. It was developed in conjunction with 201 Broadgate. The two buildings create a covered galleria between them, which runs from north to south through to Primrose Street and Exchange Square. This feature is really distinctive, and its trees are helping a lot in softening the otherwise harsh landscape. This area (together with Exchange Square) in my opinion is the most successful part of the development. Exchange Square is the largest public open space of the estate, and it’s big enough to compliment the buildings around it. Also it is the only square that hosts some kind of communal activity (eg. ice rink in wintertime).

Unfortunately the other (earlier built) parts of the development are quite depressing and kind of claustrophobic. Broadgate Circus is a tiny circular space at the entrance of Liverpool Street Station, with no vegetation at all. (Though at the time of my visit it was under construction.) Finsbury Avenue Square is too small comparing to the size of the buildings surrounding it. There is hardly any seating and just a few trees, without which this place would be truly miserable. 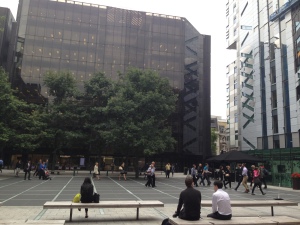 The buildings are all modern, but kind of dull, specially the onesbuilt in the 90s. The materials are predominantly metal, glass and stone. Most of them have a dark and cold atmosphere.

Generally, this place functions very well for the purposes it was created; it is a work place. It is clean and well organized, but the same time it lacks any kind of randomness or fun, it’s just dull. Even though its creators were trying to place some kind of culture on its streets; there are plenty of statues around, some of them are interesting examples of modern public art, but nobody has the time to give them any attention, they truly are just decorations.

Sadly on the weekends everything is closed here, and it becomes a “ghost-town” within the City. As nobody lives here (there are no residential units), there is no community, nothing attracts crowds here other than business.