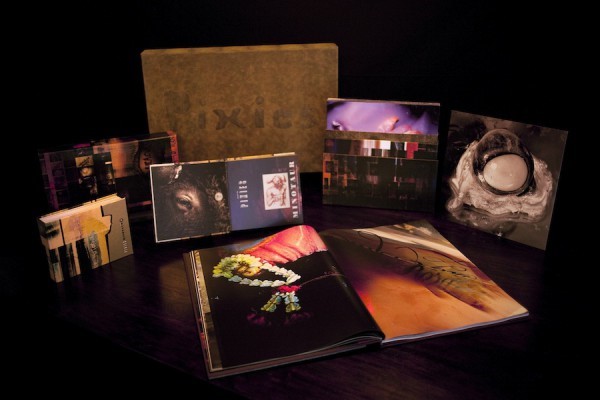 Curated by Nic Clear, Head of Architecture and Landscape at the university, the exhibition opens on Friday 26 February at the Stephen Lawrence Gallery, running until Saturday 9 April.

Vaughan will be giving a free lecture on Thursday 25 February (Stockwell Street, Room 11_0003, 6.30-7.30pm) followed by an evening preview of the exhibition.

Nic says: “From Come on Pilgrim to Indie Cindy and beyond, the combination of Vaughan Oliver’s art direction and the Pixies unique sound has resulted in a sonic and visual partnership. It is a synthesis of music, image and text that combine to create a strange, surreal and wholly beautiful body of work.

“You can appreciate and love the music and the images separately but together they create one of the most celebrated artistic collaborations of the last 30 years.

“When the creative output of one of the most important music groups intersects with the visual genius of a hugely influential designer working in collaboration with a team of highly innovative photographers and illustrators, the results can only be described as epoch defining.”

There are two parts to the exhibition. The first, located in the gallery, is a retrospective of the artwork from the Pixies’ six studio albums, associated releases and rarities. As well as final artwork the exhibition will feature original material exploring Vaughan Oliver’s creative process.

The second part, in the Stockwell Street Project Space, is a collaborative installation between Vaughan Oliver, who is also Creative Lead of Graphic Design in the Department of Creative Profession and Digital Arts, and Nic Clear. The installation is based upon the Pixies Minotaur limited edition box set and incorporates a range of text, image, video and objects organised as a series of layered spaces to create an uncanny labyrinthine environment.

South London brewery Orbit Beers has produced a beer for the show, in conjunction with Vaughan Oliver, called Hey.

For more information visit: www.greenwichunigalleries.co.uk/where-is-my-mind-the-work-of-vaughan-oliver-and-the-pixies/ or contact the gallery on ugg@gre.ac.uk or 020 8331 8260.

The Landscape is a collective blog published at the University of Greenwich, London. The Landscape Architecture and Urbanism programmes are focused on the speculative design of future landscapes and cities informed by site-focused research.